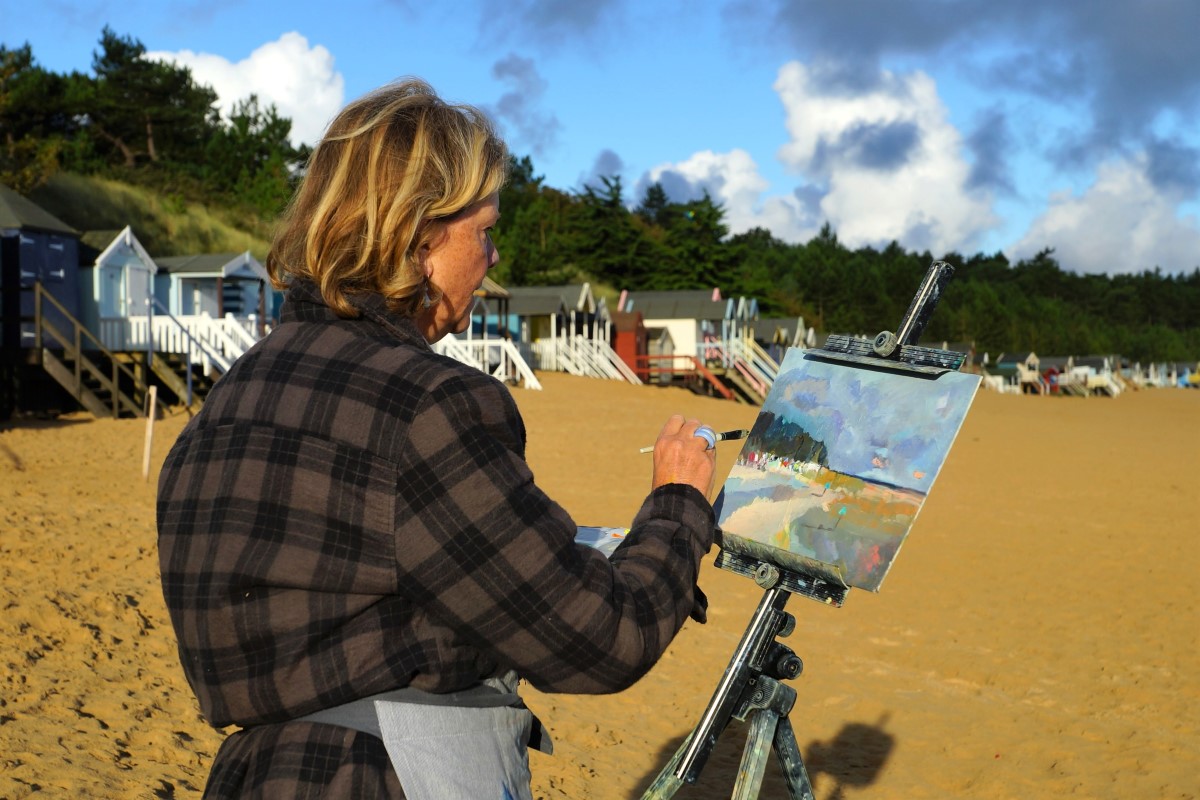 Paint Out Norfolk 1-7 July 2019 visits Bishop’s Bridge & the Red Lion in Norwich, Wells-next-the-Sea, the Norfolk Broads at How Hill, Houghton Hall, and the Sainsbury Centre in Norwich for art talks, inspiration from Monet and Hockney, socials, judging by George Rowlett & Paul Greenhalgh, awards and private view, public paint out (6 July) and art exhibition (6-7th). Transport to all painting sites available from Norwich.

Paint Out continues its 2019 programme that has included the inaugural Paint Out Cambridge and an ongoing series of five garden paint-outs with a multi-day premier juried painting event that takes in beach and Broads, countryside and campus, and historical buildings from the 1640s through to 1960s brutalism and 1970s modernism. The loan of a Monet and two Hockney paintings are set to inspire, as well as an art talk by Sainsbury Centre director Professor Paul Greenhalgh. A public paint out on the Saturday during the exhibition weekend (6-7 July) will make this open to artists of all abilities alongside the juried entry event 1-5 July being judged by among others, the eminent plein air artist George Rowlett.

Paint Out is thrilled to have been given the opportunity to host Paint Out Norfolk at the Sainsbury Centre – the preeminent Visual Arts Centre in the region housing an incredible collection of art spanning 5000 years of human creativity. Based at the campus of the University of East Anglia, Norman Foster’s vast 1978 hangar – the size of several football pitches, the Sainsbury Centre provides the backdrop to this year’s flagship Paint Out. It will also be the source of inspiration via an art talk and a special opportunity to view an amazing Monet painting ‘Allée de sapins à Varengeville‘ depicting the Normandy coast and two David Hockney artworks upon which artists can reflect as they head out to paint three classic locations around the county.

The mission of this Paint Out will be to raise the critical agenda of en plein air art practice, whatever form that may take, and continue to bring the genre to a wide and increasingly knowing audience. We’ve been working closely with the Director of Exhibitions, Paul Greenhalgh, who will also be a judge at the event, on how best this can be achieved.

First and most importantly, we feel that it’s vital to not only contextualise the relevance of what’s gone before and recognise that this is often the vital starting point for many outdoor artists but also to allow for contemporary interpretation to flood the artist’s consciousness too. In fact, we have espoused experimentation from the outset of Paint Out, since 2014, and actively encourage artists to work outside their comfort zones.

To that end, the Sainsbury Centre has secured the loans of two notorious exponents of plein air: Claude Monet and David Hockney. The 1882 Varengeville coastal scene by Monet has all the hallmark of the Master’s swirling brushmark notation and clear colour.

The two Hockneys, by contrast, are monumental iPad drawings of Yosemite, fizzing with intense Californian reds and greens and varied mark making. Both may seem out of place in the relatively muted English light but this will be the height of the summer and with luck, the opportunity for artists to gorge on fabulous coastal and Broadland sweeps, as well as be let loose within the grounds of one of England’s finest early eighteenth century houses.

In addition to Paul Greenhalgh acting as a competition judge, we are pleased to announce that the well-established plein air artist George Rowlett will be with us acting as a further arbiter of the artworks created. Born on the West Coast of Scotland in 1941, George attended the Camberwell School of Art and the Royal Academy Schools. He has work in public and private collections worldwide and is renowned for balancing both large bold impasto paintings and intimate up-close subjects. A description of Rowlett from a 2009 exhibition catalogue may give you an insight into the character who will be viewing your artistic impressions of Norfolk.

“When George Rowlett paints in the open air he is like a man wrestling with his subject. But what looks like a struggle is really an intimate dance. He stands back from the easel, a blade loaded with oil paint in one hand, and begins to shuffle as a boxer might, or an inexpert devotee of tai chi. His eyes and hands seem to be feeling the landscape, his shoulders move with its contours, both arms embrace its forms. Then, with a sudden stab and twist, another glistening slice of paint has been added to the thickening layers of rich impasto on the board before him.” – Robert Hewison

For those able to arrive Monday afternoon 1 July we will have a short welcome and induction in the Paint Out tent at the Sainsbury Centre site followed by an informal paint out at a pub on the river in the city of Norwich, the Red Lion by historic Bishop’s Bridge.

On Tuesday 2 July, we return to our favourite haunt on the Norfolk coast, Wells-next-the-sea which we’ve painted since 2015. Inspired by Monet’s depiction of the 1880s Normandy coast through the trees we’ll be visiting the timeless beach, dunes and pines there.

Wednesday’s trip will be to the beautiful setting of How Hill, the epicentre of The Norfolk Broads with its wide vistas across river and reed fen, plenty of opportunity to capture boats weaving their way up the river, original reed cutting practice, as well as the beautiful setting of How Hill’s Edwardian Garden with its terracing and eccentric layout. We will return for an art talk at the Sainsbury Centre and social.

On the third day, we have secured access to Houghton Hall and its surrounding deer park. This is an opportunity to capture one of the great houses of England and the original seat of the first Prime minister Horace Walpole.

Culminating on Friday morning, a final paint out around the campus and grounds of UEA and the Sainsbury Centre taking in 1640s Earlham Hall, 1960s Denys Lasdun’s Ziggurats, sculptures and lake, before a Private View and awards on Friday night followed by a weekend art exhibition with public paint out on the Saturday.

Transport to all locations available at a subsidised rate of £5/day.